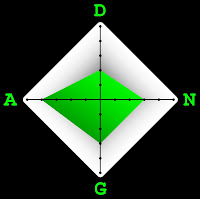 It’s been about 50 years since your father (the Hero of Fable II) defeated Lucien and became King of Albion. While the billowing smokestacks of Bowerstone’s industrial district indicate much has changed in the past five decades, many things have also stayed the same; for instance, it’s still acceptable to start a conversation with a stranger by clucking like a chicken or farting in their face. The protagonist of Fable III is the youngest son of the former king, who at the beginning of the game flees the castle to escape the oppressive rule of his eldest brother, the current reigning monarch. Shockingly, it is soon revealed (by the same blind, manipulative bitch as the last game) that it is his destiny to lead a revolution, become the new king, and eventually defend the kingdom against a terrible ancient evil.

Like its predecessor, the overall design of Fable III is best summarized by one word: “broken”. One of the biggest gaffes is that the traditional menu system has been replaced by your “sanctuary”. Thus, the pause button magically whisks you away to a series of rooms, each of which is devoted to a traditional menu option (e.g. weapons, items). While I imagine it was intended to be immersive, anyone with half a brain would realize wandering through these rooms quickly becomes a tedious alternative to a more streamlined menu. I’m a bit less judgmental about the lack of a map; though frustrating at times, I have to admit that once I got used to it, exploring the environment was much more enjoyable when I wasn’t doing it by staring at a tiny mini-map in the corner of the screen.

Most the other technical issues are fairly innocuous, such as the “golden trail” (phrasing?) that leads you towards your quest goal. It appears and disappears without warning, and I was never fully confident which quest I was currently working on, or where I would go whenever I tried to fast travel. Some other issues, however, are much more sinister than that. For example, I got bit in the ass by a “corrupted save file” bug when I played Fable II, so when I heard whispers of the same issue for this incarnation, the mere threat of it hung over my head like… well, like all the other fears and anxieties I stash up there while I go off to play video games. Which reminds me, why does Lionhead refuse to let me copy my save game to a USB drive for backup purposes? Perhaps they’re afraid that letting people copy their saves will effectively double the rate of save-game corruption. If so, then I can think of a more elegant solution, and it rhymes with “make sure my save game doesn’t get corrupted to begin with”.

Since I’m basically a narcissist, any game built around a third-person perspective gets bonus points in my book, because I get off on watching myself rain sweet death down on my enemies. Plus, I’ve always liked the artistic style of the Fable games to begin with. I find cartoon-real characters to be much easier on the eye than those creepy uncanny valley rejects of games like Oblivion or Fallout 3. Even the enemies have personality, including those pesky little hobbes with their found weapons and mismatched uniforms. Though at times borrowing a bit too much from the steampunk imagery of games like Bioshock, the whole industrial revolution aesthetic generally comes off well, right down to the mock posters and advertisements plastering the loading screens, which were still enjoyable to look at after 40 hours of gameplay. I would also like to give an honorable mention to whatever artist designed Page’s knockers. Magnificent.

The story of the game does little to impress, although I’m sure I must have anticipated this. When your character is basically named “the Hero”, you pretty much come to expect that saving the world will show up somewhere in your day planner. One complaint I have is that the same sense of personal sacrifice that was present in Fable II is gone here. I was hoping that this Hero would endure some fresh Hell resembling the 10 years of torture his father endured in the Spire, but I had no such luck. However, I did get to slaughter 50 garden gnomes, so at least there’s that. Actually, that reminds me… the whole tongue-in-cheek thing is funny in moderation, but when nearly EVERY quest is a parody, it’s hard for the main story to hold onto its proper dramatic stature.

The supporting cast is likeable and well-voiced, although it’s hard to respect them too much, because they seem to support you no matter how big of a bastard you choose to be. Which brings me to my next point: for a game that centers around moral choices, people respond remarkably little to your decisions. Decide to have a beautiful public wedding in Bowerstone town square and then proceed to brutally murder your bride at the altar, and little will change in your personal interaction (beyond the occasional sotto voce comment by some unimportant NPC). Even if the bad press starts to get on your nerves, it can be easily remedied by eating tofu. (I’m not kidding.) Eventually, I gave up and just let my choices waffle between good and evil depending on the circumstances, resulting in a main character best described as schizophrenic. Hey, maybe that’s a moral choice in itself.

Combat is largely unchanged from the previous Fable games, and thus is still just as fun. It seems like the number of enemies that attack you at once has been dialed up a bit, which makes pummeling waves of Hollow Men with a sledgehammer even more satisfying. Melee attacks include so-called “flourish” moves, which more often than not result in a slow-motion sequence wherein the Hero murders the nearest enemy in a new and stylish way. Some people might get tired of these animations, but I didn’t.

Unfortunately much of the good aspects of the gameplay are handily undone by the aforementioned design issues. Frequent glitches in quest management and the fast travel system can absolutely kill game flow, and the “revolutionary” hand-holding mechanic is just plain broken. My final gripe is that as someone who loved being a real estate mogul (i.e. evil slum lord) in Fable II, I was deeply frustrated by the need to repair my properties on a regular basis. Once you’ve accumulated a few dozen properties, having to constantly select them manually and choose “Repair” drove me crazy enough that I finally just gave up and handed in my red blazer. Sadly, a “Repair All” option would have removed this issue entirely.

If you’re like me and can never get enough of third-person action-RPGs, then despite its (numerous) flaws, Fable III is a passable alternative to going back and re-playing Secret of Mana on the SNES for the hundredth time. However, don’t expect it to be the kind of life-changing experience it’s been touted to be. Incidentally, if you ever run into Peter Molyneux and he tries to tell you otherwise, just fart in his face.