I recently decided that the number one most significant gameplay innovation of the last decade is the achievement system. You may argue with this, but I can think of no other concept that has more radically altered the way I play video games (not even multiplayer). There’s a certain aspect of revealing your entire body of gaming accomplishments that gently but persistently warps mind and spirit.
For example, back when my virtual conquests were a private affair, I could exercise a bit more self control regarding my gaming agenda. Let’s say it’s the spring of 2002 and I’ve got 200 spare hours of my life just lying around. If I decided to use those hours to drink beer with my friends and/or have sex with my girlfriend, no one needed to know I did so in lieu of power-leveling that little bitch Tidus enough to take on the secret Final Fantasy X boss Nemesis. Moreover, since there was no public record of this decision… who knows what really happened? With enough time and self-delusion… maybe history holds that I did defeat Nemesis after all.
In the Age of Achievement we have no such luxury. Now all our triumphs and failures are laid bare for the world to see, and I believe such exposure gives game designers a disturbing power over the way we play video games. To emphasize the seriousness of this issue, I thought I would list the top five most perverse behaviors I’ve been driven to by the quest for Gamerscore.

To get this achievement, one must kill 53,594 zombies—one for every resident of . Unfortunately, since the game has a time limit, the only practical way to accomplish this is to mow them down with a vehicle while driving laps through the maintenance tunnels under the mall.

In case you’re wondering what happens to your subconscious after three straight hours of listening to rotting flesh explode against the grill of a truck… well, let’s just say it’s not good. The worst part is, I get the impression that this is how the designers intended you to complete this achievement, which is just sick.

#4: Fable II “The Sacrifice” / “The Family” / “The Egomaniac” Achievements

Without giving away too many spoilers about a game that is over two years old: the exceptionally anticlimactic ending requires the Hero to choose one of three outcomes, each of which is tied to a different achievement. 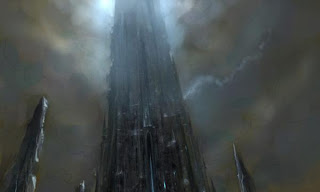 Now the game possesses an auto-save function, but if your level of self-respect is just low enough, you can quickly exit out of the game after you get one achievement and slog through the final battle again, the next time choosing a different outcome. In other words, instead of being disappointed by that pitiful final boss fight and lackluster ending once, I chose to relive that disappointment three times.

This achievement requires War to ride 100 miles on his horse, Ruin. To put things in perspective, 100 miles would have been a long way to ride even if there weren’t only three or so horse-friendly areas in the whole game. Consequently, the only feasible way to get this achievement was to go to one of these areas and just ride in circles. 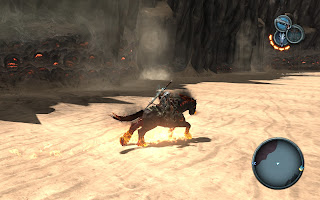 A word of caution: when your level of interaction with a video game can be accurately reproduced by a rubber band around the controller, that’s probably a good sign what you’re doing isn’t considered “fun”. In fact, I would have used an actual rubber band just to save myself a bit of humiliation, but if you try to do that the controller shuts itself off after about 15 minutes, presumably due to boredom. Sadly, boredom didn’t stop me. Achievement accomplished.

Among the many ways this game was broken were the weapon upgrade and money systems. In fact, the chain of design flaws was so elegant that it was almost brilliant in itself. To upgrade weapons you needed to use a totally unintuitive synthesis mechanism, which required certain valuable resources, which you bought with money, which you got from selling other valuable resources, which you could only get from a few specific enemies. Of course, when one has taken such a mind-raping approach to the whole of item acquisition and management in an RPG, it’s only natural to include an achievement that requires you to SSESS EVERY GODSDAMNED OBJECT IN THE UNIVERSE. 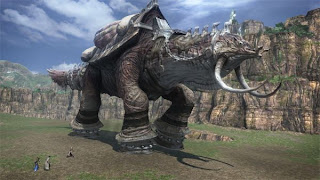 Long story short, getting 100% achievement completion in this game meant I had to spend at least 10 hours killing Adamantoises, in the desperate hopes one would drop a valuable Platinum Ingot. The good news is that I actually refined the process to the point where I could watch reruns of 30 Rock on my laptop while I ceaselessly murdered the pathetic beasts using only minimal brain activity. The bad news is that now whenever I see Tina Fey, all I want to do is kill a turtle.

#1: Prince of Persia “Be Gentle With Her” Achievement

In this offbeat member of the Prince of Persia franchise, the characteristic way for correcting your mistakes (namely, reversing time) has been replaced by Elika, a vapid little waif of an NPC that your character is forced to schlep through the game like a sexy but very annoying backpack. To get this achievement, you have to complete the game with her having saved you fewer than 100 times. 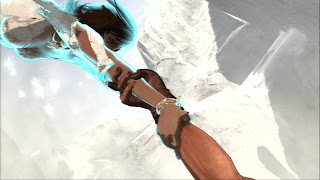 Although this wasn’t the most frustrating achievement I’ve ever gotten, I put it at number one because it completely broke the game. Performing seamless acrobatics through beautiful landscapes is a hallmark of the modern Prince of Persia franchise, and using the Sands of Time or Elika to quickly rectify any missteps and get back to the action lies at its core.
Because of this achievement, though, I played a game quite out of step with the traditional Prince of Persia experience. Every time I died, I exited out of the game (because there’s no load option), restarted it, watched a few seconds of useless animation, loaded my game, and tried again. It was terrible, and completely broke the flow of play. Thus, a single thoughtless achievement (combined with my own sick compulsions) completely ruined an entire game.
This last example brings me to my point rather nicely. Just because an achievement can compel me to do some ridiculous thing, it may not mean that I actually enjoy doing it, and I certainly might not like myself for having done it. So please, Xbox game designers… have a heart. Don’t add achievements to your games that will tempt me to search for cheats that circumvent the natural flow of gameplay, endlessly replay repetitive actions, or otherwise corrupt my gaming experience. Please… save me from myself.

What are some of the most shameful achievements you’ve ever gotten? Let me know in the comments!

2 thoughts on “Xbox Achievements: Or, How Developers Can Save Me From Myself”