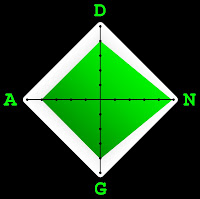 It’s 2011, and what better way to celebrate than by reviewing everyone’s favorite game for 2010: Mass Effect 2.

This second entry in BioWare’s epic sci-fi RPG series sees the return of Commander Shepard after two years of… let’s say “forced retirement”. With the help of Cerberus—his former enemies—Shepherd gets a new lease on life and returns once again to the business of saving the galaxy. And fortunately, the galaxy is conveniently still in the position of needing to be saved.

If you played the first Mass Effect game—and I sincerely hope you did, because it still ranks as one of BioWare’s finest works—then you’ll see that very little has changed about the basics. The two biggest components of gameplay are still (1) RPG-style running around and talking to people, and (2) third-person cover-based combat. Skills, abilities, and NPC actions are controlled by pausing the action and bringing up a selection wheel, although a few of your favorites can be mapped to shortcuts for real-time use. For the most part this whole approach still works very well.
There’s the good, now here’s the bad: it seems like BioWare’s took the passive-aggressive approach to rectifying the few perceived flaws in the first game. Cumbersome inventory system? Fine, why don’t you just stick with the same guns the whole game, then?? Cool space ATV handles like a broken shopping cart? Fine, why don’t you use this shuttle that we drive for you during cut-scenes?? The worst part is that I actually liked some of the things they got rid of. I liked selling loads of guns for cold hard cash, and I liked driving that piece of crap Mako around barren planetary wastelands.
Oh, and don’t even get me started about that whole planetary exploration mechanic. If you’d like to hear complaints about that mess, just read any other review of this game ever written.
Of course, some of the design changes did meet with my approval. Weapons now have limited ammo, and their efficacy varies against different armors and shields, meaning I occasionally had to be thoughtful about which gun I used, rather than just using my sniper rifle for every situation. Also, though minor, one of my favorite changes is the ability late in the game to reassign all your skill points. It’s a lot easier saving the galaxy when you’re not constantly questioning whether you chose the right upgrade at that last level-up.

I don’t know why, but I’ve never quite liked the way human faces look in the Mass Effect games. (Though I can’t say that about Miranda, since for some reason, I’ve never found myself looking at her face.) There’s something not-quite-right about the way their eyes and lips move when they talk, an effect that always seems to be worse with a custom-made player character.  However, while most of the human characters all have sort of a generic, grizzled look, the aliens are more detailed and varied than ever. Plus, you’ll have even more time to enjoy their beautiful textures, now that you don’t have to wait an extra 30 seconds for them to pop in.

Also, I’d like to complain about the environments, but I won’t. Sure, most of the settings have that same drab metal warehouse look that prevailed in the first game, but I have to admit that’s probably what deep space colonization looks like.  Besides, while all those crates lying around can look a bit ugly, something tidier probably wouldn’t be very amenable to cover-based combat.

Once again BioWare shows that with a understanding of basic plot techniques and a sturdy grasp of the English language, it is actually possible to assemble cut scenes that I’ll pay attention to, instead of just using the break in the action to grab a beer and use the bathroom. The main storyline and assorted subplots are skillfully woven together, incorporating your moral choices as well as many decisions from ME1 (provided you imported a character). If you did play the first game, then you’ll recognize many characters from your past, although most of them have undergone such radical personality changes in the past two years that you might think the has been handing out free brain tumors. As expected, you can also steer the narrative towards finding a love interest (or interests); in fact, you have more options for interspecies freakiness than ever before. Even better, if you’re ever worried about your indiscretions compromising the mission, you can just kick it 21st-century style and bang your personal assistant instead.
Altogether, I found the story about as engaging as it gets. There were times when I really worried whether my comrades were going to live or die. And since I’m surprised when I feel that way about people in the real world, you can imagine how disorienting it was to feel this way about a bunch of aliens living in my Xbox.

Most of the action part of the gameplay is combat, and for the most part it remains pretty fun, especially if you’ve chosen a character class that well suits your preferred playing style. Unfortunately, it seemed like there was a smaller variety of enemies this time around, so combat did get a bit repetitive after a while.

As for the RPG elements of the game, BioWare’s traditional “moral choice” system is once again in full force. As before, your actions and dialogue cast you as a “paragon” or a “renegade”. Fortunately, this dichotomy has been rebalanced a bit since ME1; instead of “total pushover” versus “murderous psychotic”, your behaviors are now more like “reasonable asshole” versus “murderous psychotic”. One problem with this system is the interrupt action, which occasionally allows you to break into a cut-scene with some paragon/renegade response to a situation. While a cute idea, it sort of ruins the moral choice element since you don’t know what your character is actually going to do. A brief description of what action will be performed would have fixed this issue entirely.

Despite a few missteps, Mass Effect 2 is a solid entry in a great series. Moreover, as the second act in a trilogy, it does its most important job well: leading us through an exciting tale of triumph and loss, while leaving us with the ominous sense that the most difficult challenges are yet to come.