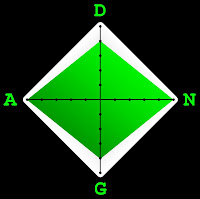 Red Dead Redemption is the most recent adventure from Rockstar Games, veterans of open-world game design. Set in 1911 in a fictitious land near the border with , Red Dead Redemption takes place during a unique time in American history: the decline of the Old West as technology, society, and the federal government work to “civilize” the last of the Western territories. It follows the story of John Marston, a reformed outlaw whose wife and son are kidnapped by government agents. In exchange for their return, Marston must hunt and execute members of his former gang… men he once considered family.

On the surface, the basic structure of RDR is Rockstar’s boilerplate open-world experience. The plot is advanced by participating in a prescribed selection of missions, in between which Marston is largely free to go wherever and do whatever he wants. Travel is limited at first, with more areas opening up as the story progresses. These boundaries are enforced by the stereotypical combination of (1) intraversable rivers and (2) making the player character suffer from the same bizarre syndrome as Altaïr in the original Assassin’s Creed, wherein he immediately dies when coming into contact with water.

For the most part the game design is passable, although a few significant quirks occasionally mar one’s experience. Most noticeable is the cover-based combat. For example, it’s never totally clear which object Marston will snap to for cover, so once in a while he decides that he’ll be safer on the side of the wall facing his enemy, a misconception that is usually rectified by a shotgun blast to the head. Also, the auto-targeting makes the gunplay so easy that it becomes a bit boring, but your reticle isn’t really responsive enough for “expert” targeting mode not to be frustrating.

My other main issues were the quick traveling and game save systems. Inclusion of quick travel is always a nice gesture, but in RDR you can only use it when you camp in the wilderness; likewise, you’re only able to save at camp or a safehouse. Since you can’t make camp near towns or roads (i.e. things you’re likely to be around all the time), these restrictions quickly become tiresome.

From the characters to the environments, the look of Red Dead Redemption is absolutely stunning. Though Marston looks like the Marlboro man lost a fight with Edward Scissorhands, his weathered face is wrought in excellent detail, and I wouldn’t change a thing about him. The rest of the characters look no less impressive, right down to their stained teeth and jaundiced eyes.

Despite the great artistry of the characters, the real star is the environment. The Western border states—which unrealistically seem to contain more climate zones than —boast some of the most visually remarkable scenes I’ve ever witnessed in a game. Even after 30 hours of gameplay, I still found myself enjoying these beautiful panoramas, and once or twice I even rode up a large mesa or mountain summit just to admire the view. Accentuating these environments is a tastefully sparse soundtrack, at times using little more than a few piano notes and a lonely fiddle melody to evoke the solitude of the open plains on a moonlit night.

The plot, characters, and dialogue of the game are generally outstanding. Though open-world games are pretty much always padded with irrelevant tasks and situations, Red Dead Redemption tries as much as possible to weave elements of character development, history, and social commentary into the actions and dialogue of nearly every mission.
A big highlight of the game for me was the assortment of colorful NPC’s. The supporting cast spans the full gamut of the human experience, from grave-robbing schizophrenics to coked-up anthropologists. One of my personal favorites was Abraham Reyes, who is basically what you would get if you merged the sex addiction of Charlie Sheen with the delusional narcissism of Kanye West into one glorious Mexican freedom fighter.

The only “flaw” in the narrative is one of necessity, namely that nothing actually compels you to participate in the plot. Rather than save his family, Marston can waste away the days gambling, hunting, or just joyriding. By the time I was done with the main story, my family had been imprisoned for about 60 days in-game; I kept thinking my wife and son would not be impressed if they found out that 3 of those days were spent tracking Khan the Legendary Jaguar.

Without spoiling the ending, let me just say that Red Dead Redemption goes to great lengths to lull you into a false sense of security before the big finale. (In fact, I felt so secure I almost stopped playing, because I didn’t think anything else was going to happen.) Even better is the surprising epilogue; I don’t think I’ve ever seen designers do so much additional work just to bring a story full circle.

Overall, the gameplay is a decent balance of action and adventure/role-playing elements. If you want to kill as many people as possible there is plenty of opportunity, but you also can spend time searching for rare herbs or hunting wild animals. As for the main plot missions, they are as diverse as one could hope. To win his family back, Marston will face combat situations, fetch quests, races, stealth missions, and an assortment of mini games. Unfortunately, the lion’s share belongs to combat, which is a shame because I believe it’s the weakest aspect of the gameplay. In many cases I actually preferred the quirky side quests (initiated by talking to “strangers”). These often entailed the most bizarre characters and situations in the game, and almost never turned out the way I expected them to.
Sadly, diversity actually turns out to be one of the problems with the gameplay experience. By the time you beat the game, you’ve basically done it all, leaving little in the way of replay value.

Its few flaws notwithstanding, Red Dead Redemption remains a stellar example of open-world gameplay. Its unique game concept and aesthetic make it an experience not to be missed.