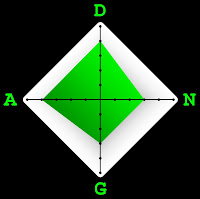 Stacking is the latest adventure from the developers at Double Fine, makers of Psychonauts and Brütal Legend. Available as a XBLA and PSN downloadable title, Stacking is a puzzle adventure set in a quirky Industrial-Age world inhabited entirely by Russian nesting dolls. As Charlie Blackmore—a child laborer and apparently the smallest denizen of this bizarre universe—the player solves puzzles by possessing larger dolls and using their abilities. In the interest of dispensing with any obvious off-color jokes as quickly as possible, let me add that this is a great game concept for anyone who enjoys being inside several people at once.

The basic concept of Stacking is simple, elegant, and effective. While standing behind it, Charlie can “stack” inside any doll exactly one size larger; he is then in full control of it, able to use its ability and/or stack inside an even larger doll. The unique abilities of each doll range from useful to absurd and entertaining, including unlocking doors, sipping tea, throwing wild uppercuts, and releasing crowd-clearing bursts of noxious flatulence.
Other than raw amusement, the main point of abilities is to solve puzzles to advance the story. Each puzzle has multiple solutions, and the game conveniently allows you to replay each puzzle in order to find them all. In fact, you can return to any earlier level later in the game to solve more puzzles or just screw around. Overall, the simple controls and the lack of “missable” features create a relaxed gameplay experience that is an enjoyable change of pace.

Although the industrial look has been done to death (see: Bioshock, Fallout, Fable III), the whole Russian doll twist makes it seem fresh and new. Actually, I was somewhat surprised by the aesthetic. When I started the game, I expected to see a bunch of human-sized wooden dolls, but I was pleased to find instead that they were normal Russian dolls in a doll-sized world.

Adding to the old-time charm of the game are the cut scenes, which are acted out on curtained stages and presented like a silent film, replete with intertitles and musical accompaniment. These scenes mesh well with the rest of the game to create a sort of storybook experience, though they occur with such frequency that they get a bit tedious by the end.

Unfortunately, the concept and aesthetics set up the game atmosphere so well, that I was actually a bit disappointed by the plot. It’s not that the story was simple and silly (Charlie’s family is kidnapped and forced into servitude by an evil Baron, and he must navigate a world of oblivious adults to rescue them), because I believe that was the intention. Rather, it was that the dialogue seemed so poorly and carelessly written, it actually undermined the classic feel that the rest of the game worked so hard to capture.

Playing through the main story is enjoyable but brief; if you’re in a hurry, you can tear through the game in an hour or two. Gameplay is bolstered by the multiple solution system, as well as the availability of unique collectibles and minor side-quests. Altogether though, I wouldn’t expect to get more than 10 hours out of it.
I’m always impressed when a simple yet innovative concept leads to a fun new game. That said, Stacking is still a bit of a one-trick pony, and the puzzling starts to get thin fairly quickly. Fortunately, I’m more willing to accept this flaw in the case of a downloadable game (versus a full-price console game), though Stacking started to test my generosity near the end.

There’s a lot that could be improved about Stacking, but the look and concept are fresh and different enough that I’m inclined to be lenient in my criticism. Plus, I give it bonus points for being the only game in my collection whose gameplay isn’t based on ceaselessly murdering monsters, aliens, or Russians. Not only is this convenient when I want to play Xbox with my toddler in the room, but I could probably stand to dial back the murdering a bit, anyway.