Tomorrow I’ll be celebrating the completion of my 32nd trip around the Sun. (Though by the time I finally post this, it might be today.) In regards to this momentous event, my wife posed a question that I expect is pretty commonly asked around such anniversaries. Namely, she asked me, “What would you like for your birthday?”
I responded in the same way I have every year since reaching adulthood: “Nothing”.
“What, there’s nothing that you want?”
Hearing the absurdity of this accusation, I thought that perhaps my original one-word response could do with some unpacking. I explained:
“Of course there are things that I want, but they all fall into one of three categories: (1) things I can afford, like video games, (2) things I can’t afford, like a helicopter or a Japanese sexbot, and (3) things that don’t exist, like hover shoes or an AeroBed that actually stays inflated. Things from the first category I’ve already bought myself, and things from the second you shouldn’t be buying me. Good luck with the third.” 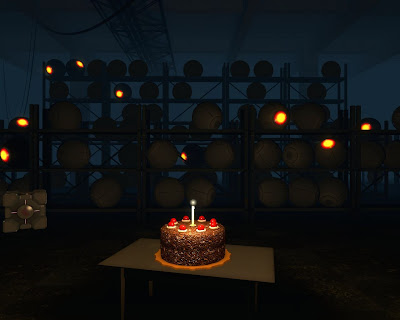 You see, this is the problem with birthdays. When you’re a kid, a gift is like free income, which is why you feel so completely ripped off when someone gets you something lame like clothes or a pencil case. (As my birthday coincides with the back-to-school season, you can believe this happened to me all the time.) When you’re an adult, it’s completely different. A gift from your parents merely serves to decrease your future inheritance by one ugly sweater’s worth, while a gift from your spouse is basically something you bought yourself.
I’m not complaining, mind you. I much prefer it this way, where I get to buy whatever I hell I want, whenever the hell I want it. At this point, I’ve got pre-orders stacked up through the holidays, including Gears of War 3, Saints Row: The Third, Elder Scrolls V: Skyrim, and Modern Warfare 3. In other words, I’ve ensured that Amazon will be delivering me a steady stream of gifts non-stop until Christmas.
Happy birthday to me.
PS – I’ve decided that instead of posting blog entries on Tuesdays and reviews on Thursdays, I’m going to post them on Tuesdays and Fridays.  However, I’m going to start posting them first thing in the morning (or the night before), so that you can actually read them on those days 🙂

One thought on “Happy Birthday to Me”