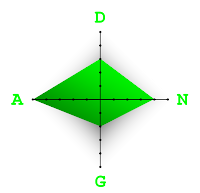 As I continue to work my way through reviewing the substantial pile of games I’ve played this year, this week I find myself encountering another Rockstar Games offering: L.A. Noire. In this interactive crime drama, you accompany detective Cole Phelps he slogs through a morass of dirty cops, corrupt politicians, and mutilated corpses in an attempt to bring order and justice to 1940’s Los Angeles.

At first glance, L.A. Noire looks like a typical Rockstar Grand-Theft-Auto-style game, in that you have a car and an absolutely enormous city to drive around in. However, that’s pretty much where the similarities end. This is not a sandbox game, so anyone expecting it to be one will be sorely disappointed.
The bulk of the gameplay comprises a linear sequence of missions (“cases”), most of which follow a set structure. Upon arriving at a crime scene, the first thing you do is collect evidence, which basically involves wandering around and randomly picking up objects for Cole to stare at intensely, until he deems them either interesting or not. The second major component of Cole’s detective repertoire is interrogation. Throughout each case you will put a number of suspects and witnesses in the hot seat; after each of their responses, you must decide whether to (1) trust their statements, (2) doubt that they’re telling you the whole truth, or (3) accuse the scumbag in question of being a big fat liar.

As game mechanics go, L.A. Noire’s is on the more innovative side, but there’s certainly a lot of issues. With such limited options for questions and responses, the interrogations proceed fairly clumsily, and I usually felt like I was more or less choosing Cole’s responses at random. Furthermore, Cole suffers from what I call the “Renegade Complex”. (The name is a reference to a similar issue I encountered in the original Mass Effect.) Since you don’t exactly know what Cole’s responses will be, you have no idea if an option like “doubt” means “try to outwit a tight-lipped witness with some pointed questioning”, or if it means “start screaming at a 12-year-old girl who just found out her mother was murdered”. In other words, I found it difficult to play Cole in a way that didn’t make him come across as borderline schizophrenic.

These issues are exacerbated by the fact that you’re trying operate within the context of an overarching plot line. Whenever things don’t add up (and often they won’t), it’s unclear whether you missed something in the current case, or if some hidden fact will be revealed in a later one. Put all these issues together and the end result is somewhat unfulfilling, such that even cases I solved “successfully” felt more like a product of luck than skill.

The visuals of L.A. Noire are absolutely stunning. I found the most impressive part to be incredibly detailed faces and expressions of the characters, a product of sophisticated new motion capture technology. I’m not sure exactly how this technology works, so let’s just assume it works exactly like the digitization laser from the movie Tron.
You’ll easily recognize a number of familiar television actors who lent their likenesses to the game, including Aaron Staton from Mad Men (who plays Cole Phelps), Greg Grunberg from Heroes, and the crazy old dude from Fringe.
Unfortunately, the city itself is a lot like a beautiful Hollywood starlet: breathtakingly beautiful, but pretty light on substance. Without the gamut of activities and side quests typical of a sandbox game, the world of L.A. Noire something is you merely pass through, rather than truly engage in.

A lot of critics have compared L.A. Noire to the movie L.A. Confidential. Plot-wise I see some similarities; for example, I didn’t really follow either of them very well. There are a lot of characters, and the fact that most of them are terse, emotionally-repressed assholes doesn’t make understanding their particular motives any easier. The game also seems to presuppose a certain knowledge of historical events (such as the Black Dahlia murder) of which I was clearly lacking. However, the dialogue is well written and well acted, so individual scenes are eminently watchable, even when you have no idea how they fit together.

And now the kicker… despite all of its polish and beauty, when it comes down to it, I just didn’t find this game fun. The lack of enjoyment could be my fault, because I didn’t know what to expect, or it could be L.A. Noire’s fault, because it doesn’t know what it wants to be. If I had to guess at a genre, L.A. Noire is more like a puzzle game than anything… but with so many flaws in its core gameplay mechanics, it’s hard to feel like there’s any puzzle you’re actually solving.

Incidentally, I even bought the “Rockstar Season Pass” and downloaded all the DLC, but by the time I was done with the game, I didn’t feel like playing any of it. I would say that’s not a great sign.

Just because something’s new and different doesn’t mean it’s good, and just because a studio takes a chance, doesn’t mean it’s going to succeed. L.A. Noire is certainly ambitious, but I feel it falls a bit short, and I’m just not in the habit of giving A’s for effort. The best thing I can say about the game is that it looks like it pushed the technological envelope in a lot of ways, the benefits of which we may be seeing for years to come.