Saturday was a gorgeous day, the kind of bright and sunny, yet breezy and temperate weather that makes me love autumn in New England. However, rather than spend outdoors one of the few perfect September days we get here in Boston, I chose to lurk in dark auditoriums and elbow my way through crowded (and by the afternoon, fairly pungent) exhibit halls. Why? Because Saturday, September 22 was Massachusetts Independent Game Development Day, which I spent attending the first ever Boston Festival of Indie Games (Boston FIG).

Co-presented by the MIT Game Lab and the Boston Indies community, the inaugural Boston FIG was a free(!) event showcasing the vibrant indie video and tabletop gaming scene in the New England region. In addition to several lectures, a game jam, an art show, and movie screenings, the exhibition halls boasted more than 30 game demos, primarily from New England indie developers.

After attending a keynote by game journalist and Gamasutra editor-at-large Leigh Alexander, I decided to brave the exhibit halls (and by “exhibit halls” I mean “crowded MIT classrooms”) to check out some of the local talent. Here are a few of the games that caught my eye.

After the keynote, I plunged headlong into the exhibition throng and gravitated to the first game that caught my eye. Lost Marbles is an homage to the classic SNES action-puzzle game Lost Vikings, reimagined by developer Binary Takeover as a 3D Marble Madness style game (hence the name “Lost Marbles”). 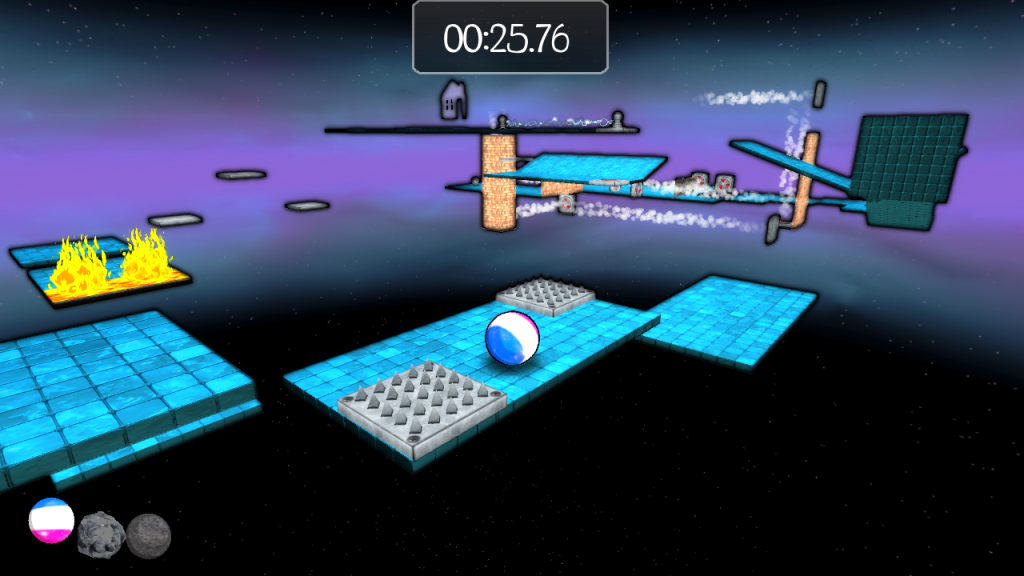 I think the reason the marbles were lost was because I kept accidentally steering them into the abyss.

I enjoyed the clean, bright cel-shaded graphics (which I thought really worked for this kind of puzzle game), but I honestly had trouble telling if Lost Marbles was actually fun or not. I found the controls to be pretty twitchy, and I spent most of my time driving my marbles off the narrow paths they were supposed to be traversing. After a few dozen restarts, I scraped together what was left of my dignity and went off to look for something that demanded a little less in the fine-motor-skills department.

Hoping to purge myself of the stink of failure, I looked around for a game that might play more to my strengths. Enter Popcannibal’s iOS title Girls Like Robots, a self-proclaimed “romance, adventure, puzzle game about seating arrangements”. (Apparently this game was at PAX East this spring, but I must have missed it there.) Reminiscent of the classical “ménage problem” in combinatorial mathematics, Girls Like Robots asks you to arrange various people in a space, each according to their particular preferences. For example, you might surmise from the title that the girls like to sit next to the robots. 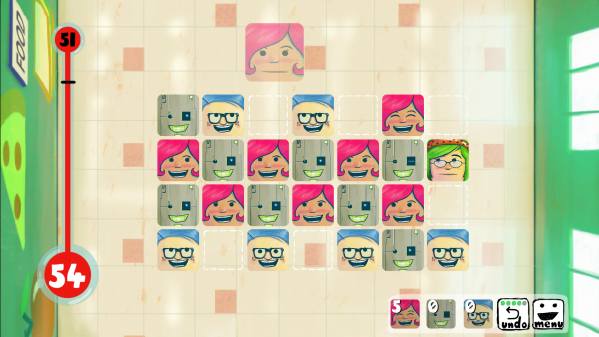 Girls like robots, but hate nerds. Who do those bitches think built all the robots?

Girls Like Robots seemed like the kind of fun, stylish, tightly-designed puzzle game that is perfect for mobile platforms. It has a light-hearted sensibility that plays well with its eccentric art style, and I’m sure it will be well worth the dollar or two purchase price via iTunes when it releases.

Next, I stopped by to visit my friends at the Intrepid booth, to talk to them about their upcoming game Prime’s Quest, debuting soon on iOS platforms. Prime’s Quest builds on the traditional “sobokan” (warehouse keeper) style of puzzle game, wherein the player has to shift a bunch of blocks or crates around a crowded room to make it to the exit. I’ve been playing the beta, and so far it’s got some great new mechanics that make this classic puzzle style seem fresh. I’m looking forward to playing the finished product.

One of the great things about the game expo environment is that you get to see products before they are finished. Some of them, like Rite are still in the prototype stages, allowing you a unique opportunity to engage the developer early in the design process. Developed by Father Octopus (which is also the name of the founder’s band), Rite is a puzzle-platformer where you guide some sort of futuristic priest through a maze of deadly traps. The primary puzzle element I saw was a “dimension-splitting” mechanic, wherein you divided the player character into two copies of himself, which you had to control simultaneously. 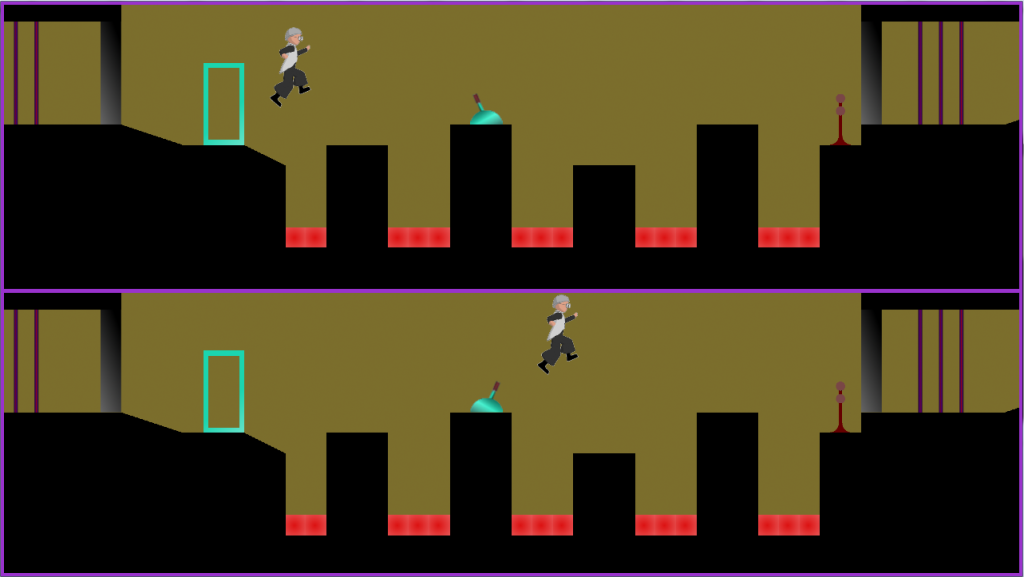 The web page for Rite describes the protagonist as “trapped in a horrible room filled with programmer art”.

Given that puzzle-platformers have become a somewhat trite and overutilized genre as of late—they’re basically like the dubstep of indie games— Rite may have a hard time standing out from the crowd. However, even in its infancy, I could tell the game captured a certain distinctive ambience, one that could really shine with the right graphics and audio direction. 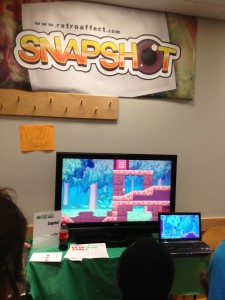 Of course, after disparaging the whole genre of puzzle-platformers, the next game I played was Snapshot, a puzzle-platformer by Retro Affect available now on Steam. I first played this game at PAX East this spring and really enjoyed it.

In Snapshot, you play as an adorable robot who uses his camera to capture items from the world, which he can then use to solve puzzles. Captured items maintain physical qualities such as their momentum, giving many of the puzzles a physics-based bent. One nice thing about Snapshot is that unlike most modern indie platformers, the grisly character deaths are kept pretty much to a minimum, meaning that I can play this game with my three-year-old without worrying that he’ll be waking me up in the middle of the night because he thinks Meat Boy is trying to kill him.

One of the last games that really grabbed my attention was Candlelight by Idle Action Studios, a game that I’m not going to call a “puzzle-platformer” only because I’m sick of typing those words. In Candlelight, you to control two characters simultaneously with independent controls (e.g. with the WASD and OKL; keys on a keyboard, or eventually with dual joysticks, one would presume). The silhouette-based graphics divide the environment into light and dark, positive and negative spaces over which the pair of characters can exert certain powers. For example, the one character’s lantern might cause hidden platforms to appear, or remove certain obstacles from view allowing the other character to pass. 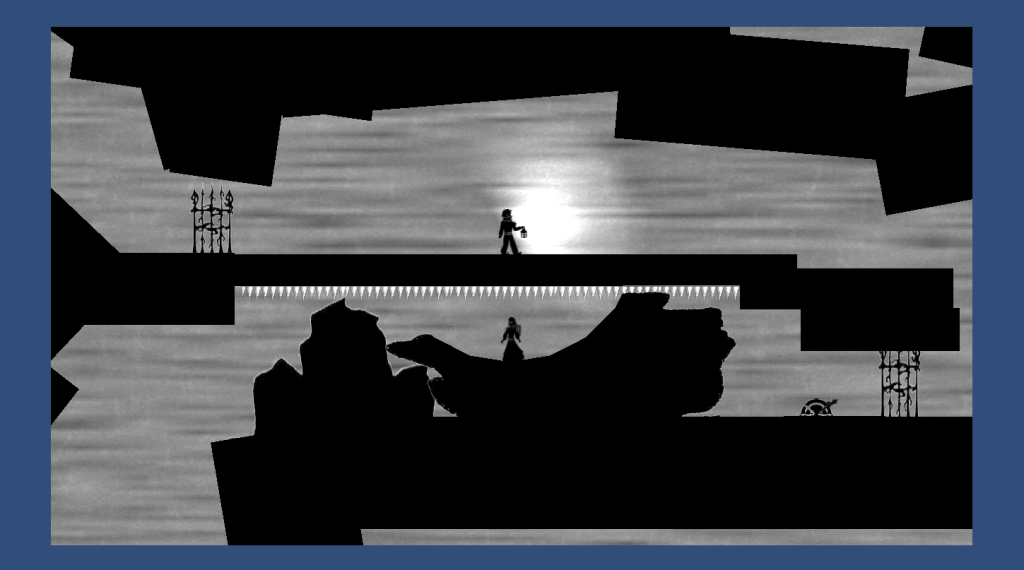 I’m pretty sure if this were my wife and I, she wouldn’t let me wander off with the lantern while she crawled through the spike-and-rock tunnel by herself.

The game still has a long way to go, but the version I played at Boston FIG already had some really smart design choices. For example, when the characters became separated, the view gently separated into a split-screen arrangement, which gradually shifted to corners of the screen as the characters became even farther apart. The effect gave me a subtle sense of where my characters were in the world, and was a much more elegant solution than more traditional approaches such as zooming way out, or plotting my location on some sort of mini-map.

All in all, Boston FIG was a great event. Although I played plenty of other promising games, I hope the handful I talked about give you a sense of just how exciting the indie game scene is here in Boston. Speaking with one of the festival organizers late in the day, he shared that in his estimation, there were about 2-4 times the number of attendees than they expected—about 2,000 or so total. Hopefully the success of the event was such that Boston Festival of Indie Games will continue to be an annual tradition for years to come.