When two bombs exploded at the Boston Marathon on Monday—killing 3 people and severely injuring more than 100 others—my first thought was a fairly obvious one: “Wow… that could have been us.” We’ve been down to watch the Marathon many times, and it was simply a matter of chance that instead of navigating the crowds in Copley Square, we had chosen to spend this Patriot’s Day kicking around at home in Watertown. Had circumstances been just a little bit different, it could easily have been my family and I caught in that blast.

Except, I don’t think deep down I really believed that. Even though a major terrorist attack had just happened in my city, my family and friends all turned out to be okay, and somehow I wasn’t surprised. After all, I’m the main character in this story, and in my experience these sorts of things happen to other people.

I’m not sure this kind of narcissistic detachment from reality is particularly healthy, but I bet it’s not all that atypical either, and I’m sure the massive amount of time I’ve spent playing video games in my lifetime has been a factor. Like television and movies, games reinforce our human tendency to distill stories from the randomness and chaos of the universe. We hone our sense of what will and won’t happen to a protagonist, which side characters are and aren’t expendable, and eventually the whole world appears as a patchwork of overused tropes and predictable plot points.

Just your typical mid-day armored surveillance, no big deal.[/caption]So inertial was my concept of my own narrative, that when my wife woke me up at 3:00 AM yesterday to tell me that there had been a shootout and explosions here in Watertown, I don’t think I was all that concerned. Even when we were informed that we were prisoners in our own homes, even as we drew our shades, locked our doors and windows, and retreated to the second floor of our house, I don’t think I felt any real sense of danger. Soon they would catch “Suspect #2”, the lockdown would be lifted, and life would return to normal.

But that didn’t happen. The governor announced that the lockdown was ending, but that no suspect had been apprehended. Deflated, we began to wander outside to chat with our neighbors and escape the stale air of our shuttered house. Then, sirens began blaring and dozens of police vehicles descended upon our street like it was Nakatomi Plaza, and in an instant my story had veered wildly off course, as though someone was performing very bad (or perhaps very good) improv theater. A firefight erupted about a hundred feet from my house, and I realized it was the first time I had ever heard real gunshots—not Call of Duty sound effects, or the muffled pop of a rifle at a shooting range, but real honest-to-goodness people trying to kill one another. Suddenly my wife and I were laying the floor, cradling our children, and I realized I genuinely didn’t know what was going to happen next. This whole thing had gone off the rails, and now I was the guy on the news, and my street was that “somewhere else” I was so used to seeing on the Internet and television.

I took this video from my bedroom window. You can hear the initial barrage of gunfire near the end, right around the time I soil myself. 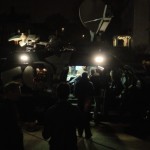 Soon it was over. After spending about two hours crawling around the floor of our house while flooding the Internet with messages to friends and family that we were okay, vehicles began to leave the scene, people began peeking out of their houses, and it became clear the ordeal had ended. Amid a chorus of cheers and thank-yous, the police began turning our neighborhood from a parking lot back into a warren of residential side-streets, and then I really was the guy on the news, giving interviews to local reporters and speaking live on the air with Diane Sawyer.

I spent the next few hours hanging out on my front lawn, drinking bourbon out of a coffee cup and chatting with neighbors about how utterly ludicrous this all was. In the back of my head, though, I was adrift. As a mathematician I know logically that every distribution has its tails, so even very rare events happen from time to time. However, as a human being (especially one who plays a lot of video games), I just don’t believe these things happen in the real world—they’re supposed to happen on a screen, or in some equally far-off land. 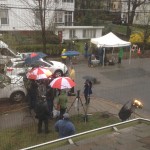 As we wake up this morning, my family and I are unscathed, and the news sites look the way they should look, with a violent terrorist in custody, to be interrogated in some secret location and then tried in some court I’ll see on television someday. Ultimately, I imagine my egocentric, story-driven world view will bounce back, especially after I spend some more time with my Xbox, pretending to be a legendary hero who saves the world from some great evil. For today, though, the news vans are still here on Franklin Street, and I’m still feeling adrift in a world where truly anything can happen.

5 thoughts on “Manhunt for the Boston Marathon Bomber: What to Do When You Suddenly Find Yourself in an Action Movie”