Boston is a wonderfully complex and confusing city. The people here tend to be coarse and sarcastic on the surface, but I’ve found deep down they are generous and kind. We New Englanders hate the weather but love the outdoors, and though we complain about our incomprehensible infrastructure, we’re secretly proud that we know how to navigate it. It’s the kind of place where the world’s greatest academic minds can live together with total asshole drunken townie sports fans, sometimes within the same person. It’s the cradle of American freedom and a bastion of left-wing liberal ideals, where the bars inexplicably close at 1:30 AM because some Puritans 400 years ago though alcohol was the Devil. 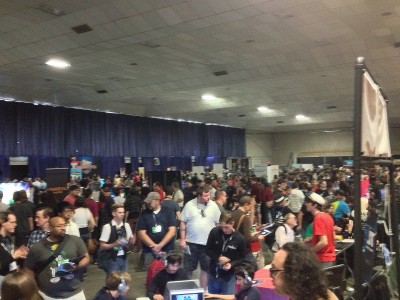 This city full of brilliant, hard-working, eccentric, and demonstrably masochistic misfits is an ideal home to a vibrant indie games community. That’s why I was so thrilled this past weekend to be attending the 2nd Annual Boston Festival of Indie Games on MIT’s campus in Cambridge. It was a wonderful day-long celebration of the local contributions being made across a wide spectrum of indie digital and tabletop gaming, and best of all (thanks to generous business partners and a successful Kickstarter), it was free and open to the public.

Though I was supposed to be helping staff our table promoting the Extra Life charity event, my fellow Lifers were generous enough to let me sneak off to catch a few talks and hit the expo floor for a good part of the day. Here are some of the noteworthy talks and games I came across. 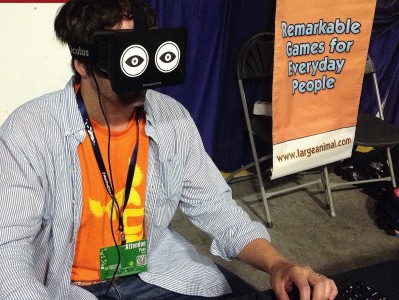 Once I get my own Oculus Rift, I’ll be able to looks this ridiculous in the comfort of my own home.

I started by checking up the games I recognized from last year’s Boston FIG and this year’s PAX East. Defective Studios was showing an Oculus Rift version of their space racing / obstacle course game Gimbal Cop, which was my first experience with the new VR headset. Even playing their quick-and-dirty prototype, I was able to see why people are so excited about this device.

Some of the puzzle-platformers I had seen before were coming along well, including Idle Action’s Candlelight and Father Octopus’s Rite. Interestingly, both are single-player games where you coordinate two characters simultaneously, though Candlelight is more of a “single player co-op” game like the recent indie darling Brothers: A Tale of Two Sons, while Rite uses a cloning mechanic that is more similar to Facepalm Games’ recent title The Swapper. 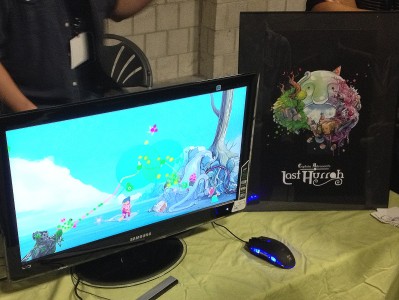 According to Popcannibal founder Ziba Scott, Last Hurrah will be like “playing the love child of Monkey Island and Starcraft while watching The NeverEnding Story.”

After a while, I pried myself away from my old favorites to try some games I’d never seen before. One crowd favorite was Swimsanity, a 4-player competitive brawler (à la Smash Bros.) in an underwater setting full of robotic sea creatures. It certainly seemed fun and boasted an impressive variety of game modes for an indie title, although in an expo setting it’s very hard to gauge the quality of a game whose genre is so dependent on tight controls and character balance.

Another notable entry was Captain Astronaut’s Last Hurrah, a new effort by the Cambridge studio Popcannibal (creators of Girls Like Robots). The demo was a promising fusion of adventure game and real-time strategy, two great tastes that I’ve never seen anyone try to taste together. I’m certainly looking forward to playing the completed game—though let’s hope that the Wii controllers used in the demo system don’t portend it ending up on Nintendo’s wasteland of a console.

One great feature of this year’s Boston FIG was the abundance of child-appropriate games, which was fortuitious because it allowed my wife to bring our 4-year-old son and 20-month-old daughter for their first video game expo. While the whole “violent video games” debate typically makes me want to shove people into oncoming traffic, I do have other problems with many games designed for children. Especially on mobile devices, children’s games often fall in one of two categories: (1) highly polished but horribly balanced free-to-play titles, designed to exploit parents too tech-illiterate to disable in-app purchases, or (2) “educational” games not only of questionable pedagogical value, but also lacking in any sort of decent gameplay and graphics, presumably because children are supposed to be morons who would never notice that a game is ugly and not fun. 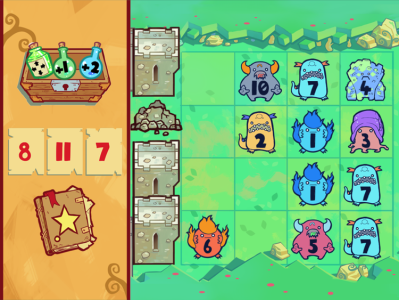 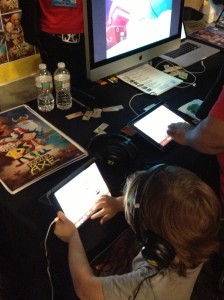 He’s happy now, but my son went berserk when he found out most of the games he played aren’t actually available to buy yet.

Fortunately, Boston FIG did a great job of filling the enormous need for quality children’s games in the current market. My son especially loved The Counting Kingdom, an addition/subtraction learning game by Little Worlds Interactive, and Puzzle Axe, a jigsaw puzzle game by Canadian company Trinome with fabulous animation and storytelling. 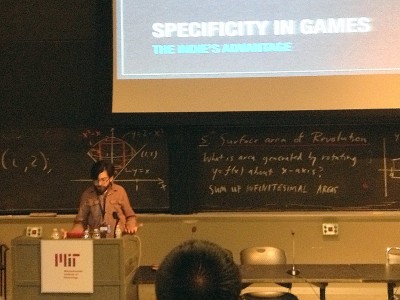 All game talks should be against a backdrop of miscellaneous MIT equations.

There were a lot of great speakers at Boston FIG this year, but unfortunately I only made it to a few of the talks. One was the mid-day keynote by Chris Remo of Idle Thumbs, which addressed the ability of indie games to provide simple, highly focused game experiences—something I’ve talked about a great deal in the past. He made a lot of points I agree with, which I suppose is why I choose to listen to his podcasts. I mean, who wants to hear opinions they don’t agree with?

I also attended a panel titled “Boston: The Cradle of Narrative Games”, featuring writers from Infocom (creators of the old Zork text adventures in the 1980s) and Looking Glass (creators of the System Shock and Thief games in the 1990s). Most of discussion consisted of these game veterans recounting war stories of the days before all the great tools we have now, though I do have to admit it was interesting hearing Professor Moriarty (yes, you read that right) describing publishing his first game in print form, meaning that anyone who wanted to play it had to copy the code manually from the pages to their own machine. 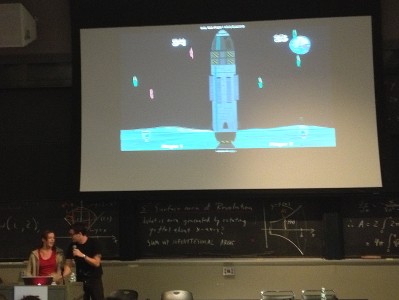 “Sometimes if you wait, the game just wins itself.”

The final part of the festival was the awards ceremony, which also featured presentations from teams who had been participating in a game jam running concurrently with the festival. Hardly any of the games that won awards were ones that I played, so apparently I’m terrible at picking good games out of a lineup.

The theme of the jam was “Equality”, and some of the entries turned out quite well. Particularly memorable was “Infinity Spaceship”, a co-op math game where two players had to catch falling numbers until their totals were equal. I’ve never seen a crowd go that nuts watching a game jam demonstration, and it’s remarkable that someone could make something that much fun in a day. Similarly impressive was “Enlightenment”, a gravity-switching infinite runner / platformer that required you to balance the amount you ran on the floor and the ceiling—coded in 6 hours by a team of teenagers!

All told, Boston FIG 2013 blew last year’s festival away, an amazing feat considering how much I enjoyed the inaugural event. Speaking with Robin Hunicke (the producer of Journey) at the after-party, I recall her saying she was glad her keynote was well received despite her concern that it might be “too nerdy a talk for the general public”.

“Hey, this is Boston.” I replied, “The general public is pretty nerdy.”