9:30 AM – It’s the third and final day of PAX East 2014! Sunday is the shortest of the three days, but easily feels the longest. I really can’t imagine how exhausted the exhibitors are at this point (though that’s due in part to my poor emotional intelligence and limited capacity for human empathy).

11:00 AM – Powered up by a hearty dim sum brunch from Boston’s Chinatown, we hit the expo floor to cross as many game demos off our PAX bucket list as possible. Some of the best we found were suggestions from the Giant Bomb panel last night, such as Darkest Dungeon (Red Hook Studios) and Hyper Light Drifter (Heart Machine).

Darkest Dungeon is a nicely modernized version of an old-school party-based RPG (e.g. Bard’s Tale), but with a twist: your characters must deal with the psychological stresses of adventuring. They will develop preferences, phobias, and issues with other characters, and when tested repeatedly in battle, they may crumble in fear or rise to greatness, occasionally requiring a few day’s rest in town and/or a stiff drink. 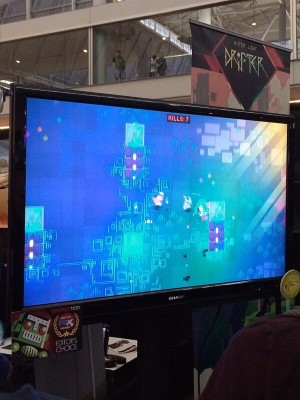 Hyper Light Drifter, by contrast, is a fast-paced action RPG with solid beat-em-up combat that plays much more like Devil May Cry or God of War than it does something like Zelda. And while I’m kind of over the whole pixel art thing, HLD seems like it’s employing a low-res style more for its minimalist expression of form, motion, and light than as a way to evoke nostalgia.

2:00 PM – We decided to take a break from the chaos of the show floor and relax with a nice, soothing panel. Naturally, we chose 404ing It: Breaking (Down) the Internet, the panel that takes the modern electronic marvel that is the World Wide Web and reduces it to a non-interactive slide-show format. Although there were plenty of Internet gems to be found here in “the Tosh.0 of PAX” (such as this one) we made the tragic mistake of forgetting just how disturbed Eric Pope (Community Manager of Harmonix) is. This costly lapse in judgement allowed us to be totally blindsided by choice videos like the one below—watch it only if you enjoy terrible CGI and having your dreams haunted forever.

3:30 PM – We had hoped to play Below (an evocative survival/exploration game by Capybara Games), but after waiting in a long and nearly motionless queue for about 30 minutes, we were compelled to seek greener pastures and shorter lines. 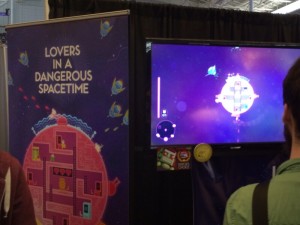 Other than being named for a cheesy 80s Bruce Cockburn song, LiaDS has got it going on.

Instead we played Lovers in a Dangerous Spacetime, a game by the Toronto-based developer Asteroid Base. Lovers in a Dangerous Spacetime is basically what FTL would be if it were full of bright colors and wonder and love instead of oxygen deprivation and cabin fires and death. You and a partner pilot a spaceship equipped with a variety of attack and defense modules, scrambling around the vessel to operate them all whilst exploring the universe and saving imprisoned bunnies. It was beautiful and challenging and fun, and I can’t wait to play it with my wife and my kids.

5:30 PM – Exhausted, we were about to call it a day when we decided to squeeze in one last game: Mushroom 11 by Untame Games. That last stop turned out to be a great decision, because Mushroom 11 is a great game. 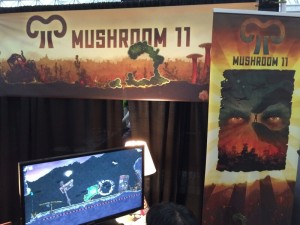 I get the feeling from all this glowing ooze and rubble that “mushroom” means the cloud and not the pizza topping.

The game is a bit hard to describe; you basically control some sort of bio-mechanical self-replicating toxic ooze by constantly destroying it and allowing it to grow in new directions. Ultimately, what makes the game impressive are the two things that make any really well designed puzzle game impressive: (1) it has a system whose rules are simple and easy-to-learn, yet allow for highly complex puzzles and solutions, and (2) as you play the game, it actually teaches you to think differently. I love the feeling of a game subtly twisting my way of looking at a problem (helping me learn to “think with portals”, if you will), and even in the demo Mushroom 11 did exactly that.

Well, that pretty much wraps up PAX East 2014. It was another great year, and I saw and played plenty of compelling games that I’m looking forward to seeing released. I’d like to close with a word of thanks to the organizers, security personnel, and all the attendees of PAX for helping us all have such a safe and fun conference. Massive crowds and big events can be tough to deal with these days, and even with all the fake weapons and laden backpacks, I’ve rarely felt as secure and comfortable in a public space as I felt this weekend.