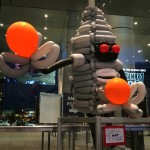 Inflatable Fruit F**ker 2000. Worth the price of admission.

10:00 AM – Back to the convention center for Round 2. Saturday at PAX traditionally draws the most die-hard fans, the ones who are willing to wait for hours to play the newest entry in their favorite franchise for just a few minutes, or spend months painstakingly crafting highly accurate foam replicas of fantasy weapons and armor. In the real world they are considered quite crazy, but here at PAX they are… well, still a little bit crazy.

11:00 AM – Our clever plan to avoid the interminable wait in the pre-PAX basement corral was thwarted by a ridiculously long (but at least continually-moving) security line. Eventually we made it inside, but opted to head straight to our 12:00 panel and skip the expo floor for now.

Project Spark is Fable meets LittleBigPlanet, turned up to 11.

1:00 PM – Attended the “Playing is Creating” panel with developers from Project Spark, a new game-making platform whose beta was recently released on Windows 8 and Xbox One. Spark is an incredible environment for creating and sharing game content across a wide range of ages and interests, and it was clear from the panel that the folks involved had thought very deeply about things like (1) how to get a broad audience involved in game-making, (2) how to encourage good practices around prototyping, experimentation, and playtesting, and (3) how to handle collaboration and attribution in an open source/”remix” culture.

2:30 PM – When we finally got a chance to make it back to the expo floor, I tried to focus on games I hadn’t seen or heard of before. Two of the more promising offerings were Papercade (Hololabs), an iOS game that allowed you to make your own choose-your-own adventure books, and Deadrock Divide (Bootsnake Games), an open-world space game with XCOM-style tactical combat. Both were a bit rough, but had plenty of potential.

“Look on my works, ye mighty, and despair.”

I was also very intrigued by Elegy for a Dead World, a collaboration between Boston-based developers Dejobaan and Popcannibal. It’s basically what would have happened if scientists took Jodie Foster’s advice from the movie Contact and “sent a poet”—as the player, your job is to explore a dead alien world and write an inspired account of its history, beauty, accomplishments, failures, and ultimate demise. Making a game about creative writing is exactly the sort of insane bet I would expect from these guys, and I sure hope it pays off for them. 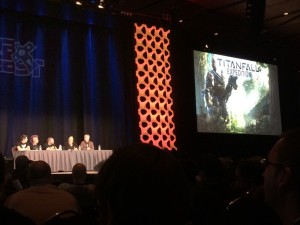 Titanfall will be releasing plenty of free updates in 2014, in addition to some paid DLC content (read: map packs)

4:30 PM – After working the Extra Life booth for a bit (thanks to everyone who signed up!), we headed over to the line for the Titanfall panel. It was fascinating to hear how bare-bones the beginnings of Respawn was after its founders were jettisoned from Infinity Ward, from not having any game engine or tools (or Internet service) to the community manager buying @respawn from a 14-year-old in Latvia. Perhaps the most important thing the panel communicated was how much doubt there is in the game development process—even a slam dunk like Titanfall doesn’t necessarily feel that way as you’re making it. They also shared some details about upcoming free updates and DLC, and although there were no huge surprises here, I was encouraged by how committed the team was to continuing to improve the core Titanfall experience, as opposed to focusing only on DLC or worrying about their next big game. (Also, I can’t wait for the “Wingman” Last Titan Standing game mode to drop.) 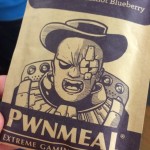 “Tonight we dine on oats. In Hell.”

8:30 PM – We made a brief final swing through the expo floor to pick out some good targets to demo for tomorrow, and then enjoyed a dinner break before heading back to wait in line for the evening Giant Bomb panel. Although the line for the GB panel is always long, it was a good opportunity to relax in an incredibly sweaty and loud environment, collect a bunch of Nintendo 3DS Streetpass puzzle pieces that you hate yourself for even caring about, and maybe even enjoy a nice bowl of Pwnmeal: Extreme Gaming Oatmeal (a brilliant creation of Cards Against Humanity’s Max Temkin.) 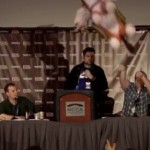 Inflatable winged donkey. The very definition of a disruptive innovation.

10:45 PM – The Giant Bomb panel was exactly the sort of barely-contained chaos I’ve come to expect, from its lofty opening featuring an inspired Dave Lang reimagining of Carl Sagan’s classic “pale blue dot” reflections, to its dramatic finale of running out of time and taking audience questions. We also got some great suggestions for some must-see games, which we will definitely be our focus the expo floor tomorrow.