These days life rarely affords me the time to play video games, much less write about them. However, one gaming event I always make time for is PAX East—especially this year, when the hot, sweaty, crowded expo floor of was a welcome tropical vacation from the comically extreme weather we’ve endured in New England this winter.

Despite this being my fourth PAX, the first day was as overwhelming as ever. I cruised the show floor and got my bearings, adding a few promising-looking games to my to-do list before heading to the “Bunch of Dads” podcast panel.

In retrospect, listening to a group of video game professionals commiserate about challenges of parenthood probably wasn’t the best use of my time, considering there already so few hours in the day when I could forget about my own fatherly duties. On the other hand, there was some interesting discussion about Curt Shilling’s recent rampage against Internet trolls, and also I learned about an amazing and horrifying product called NoseFrida the Snotsucker. So, there’s that.

Returning to the show floor, I started to dig into the huge, impressive-looking selection of indie games at this year’s PAX. Two of my favorites were Guild of Dungeoneering (Gambrinous) and Ronin (Tomasz Wacławek). Guild of Dungeoneering is a turn-based roguelike dungeon crawler / strategy card game, where instead of controlling the player character, you build the dungeon around them. I loved it as much for its gameplay as for its charming pencil-and-graph-paper visual style. Ronin is a 2-D stealth game reminiscent of Mark of the Ninja and Gunpoint, with a great turn-based bullet-dodging mechanic when you were spotted by enemies. From my first play it seemed to possess that most important quality you want in any stealth game: when you pull off everything the way you intended, you end up looking awesome and feeling like a total badass. 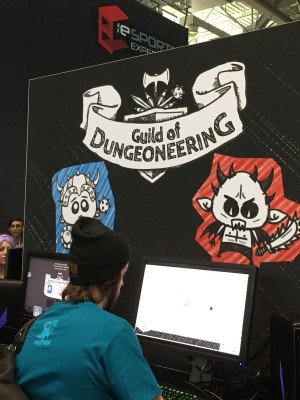 I wrapped up the day with a panel titled “The End Boss Doesn’t Exist: Atheism in Video Games”, featuring Ken Levine and some other guys who were not Ken Levine. The panel included some interesting discussion of religion in games like Fallout, Dragon Age, and Bioshock. For example, how do video games writers (many of whom are athiest/agnostic) create engaging characters and narratives for players (many of whom are athiest/agnostic) when religion is an integral part of the fictional world?

Though it was a full first day, I left for dinner feeling like there was still a lot of work to be done, and a lot of games to be played. On to Day Two!